In honor of World AIDS day, the AFI Catalog spotlights PARTING GLANCES (1986), one of the first American films to cast its gaze on the AIDS crisis. Released 35 years ago this month, PARTING GLANCES was written, edited and directed by first-time filmmaker Bill Sherwood, who tragically died from complications with AIDS before he was able to make another movie. PARTING GLANCES also marked Steve Buscemi’s first breakout role in a feature film, which Film Comment called “a deeply compelling example of narrative cinema’s ability to illuminate the political in the personal.”

Using New York City as a backdrop, Bill Sherwood wrote the script for PARTING GLANCES over the course of two months beginning in December 1983 and based his characters on real people in an effort to normalize gay life and transcend negative stereotypes. PARTING GLANCES takes a 24-hour look at the lives of couple Robert (John Bolger) and Michael (Richard Ganoung) who live on the Upper West Side. Michael has become complacent with their privileged lifestyle and longs to reconnect with his first love, Nick (Steve Buscemi), a rock singer dying of AIDS. 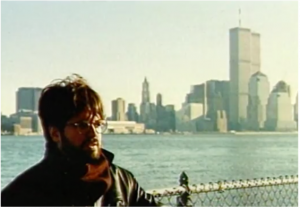 Six weeks before shooting began in late September 1984, the Screen Actors Guild (SAG) abolished a low budget pay scale previously offered to independent producers, forcing Sherwood to cast the film with non-union actors. Sherwood hired friends, including Kathy Kinney, a comedienne and former colleague of Sherwood’s at CBS, and Theodore Ganger, a high school companion. The cast and crew numbered more than one hundred people, many of whom agreed to work for free or for deferred payments. Filming took place over eight weeks on 16mm film at several locations in Manhattan, Fire Island and New Jersey with a budget of $250,000. Investors included roughly twelve members of Sherwood’s friends and family, and first-time film producer Yoram Mandel brought in additional funds. Although the production depleted its budget one week before filming was completed, Sherwood assembled an early edit of the film and showed it to Paul A. Kaplan, who agreed to finance the remainder of the project.

Sherwood, a violinist and former music student at Juilliard, paid close attention to the scoring of the picture by assigning characters their own musical themes, using a mixture of classical music and rock’n’roll, and sometimes playing both at the same time. He noted that he approached the film as a composer, regarding the dialogue, action, lighting and camera motion as forms of musical expression.

The film first screened at New York’s Independent Feature Market in October 1985. Cinecom International Films signed on to distribute the film one week after it was viewed by the company’s marketing and distribution executive at the time, Ira Deutchman. After the film opened to considerable critical acclaim in large markets— New York and Los Angeles — Cinecom booked additional engagements in Seattle, San Francisco, Chicago, Boston and Washington, DC. Reviewers consistently praised the technical aspects of the film, impressed by what the filmmakers accomplished on such a small budget. 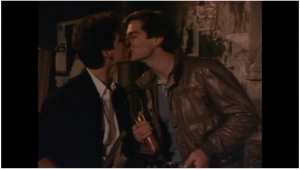 In July 2007, the Outfest Legacy Project, a collaboration between Outfest and the University of California Los Angeles (UCLA) Film & Television Archive, hosted the world premiere of their restoration of PARTING GLANCES in honor of Outfest’s 25th anniversary.

Critics today continue to note the movie’s significance, with reviewer Annie Wagner stating, “PARTING GLANCES avoided future AIDS movie clichés not because the example had yet to be set, but because its interests lay elsewhere—in a study of a sexually complicated friendship and in a loving portrait of bohemian New York suddenly aware of its own foreshortened prospects,” and Michael D. Klemm calling it “still one of the best gay-themed independent films ever released.” While other feature films about AIDS were on the horizon, PARTING GLANCES marked a pioneering effort to defy gay stereotypes and to tell a story that was rarely explored in movies at the time.