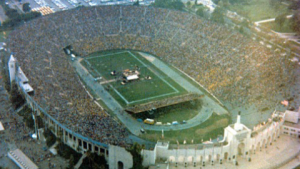 This February, the AFI Catalog shines a spotlight on the landmark musical performance documentary WATTSTAX which was released 50 years ago this month. The film presents footage of what became known as the “Black Woodstock,” a seven-hour, August 1972 concert called Wattstax organized by Memphis’ Stax Records to commemorate the Watts Riots of 1965 and to honor the African American community, featuring the talent of the label’s most famous Black artists, including The Staple Singers, The Emotions, Albert King, The Bar Kays, Rufus Thomas, Carla Thomas and Isaac Hayes, who had recently become the first African American in history to win a non-actor Academy Award® for the theme of SHAFT (1971). With over 100,000 people in attendance at the Los Angeles Coliseum and more than 25 Black entertainers on stage, Wattstax represented one of the largest African American audiences for a concert to date, and was a Black gathering in size second only to the March on Washington in 1963. Directed by Mel Stuart and produced by David L. Wolper (who collaborated previously on several films including the 1971 children’s classic WILLY WONKA AND THE CHOCOLATE FACTORY and the 1964 documentary FOUR DAYS IN NOVEMBER about the assassination of John F. Kennedy), WATTSTAX was nominated for a Best Documentary Golden Globe Award and marked the feature film debut of civil rights leader Reverend Jesse Jackson, MC of the event. 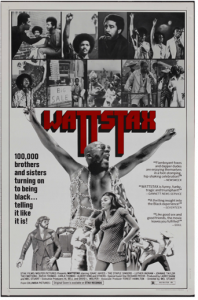 WATTSTAX did not only contain concert footage. It also showcased glimpses of life in Los Angeles where the Black community continued to struggle with poverty, marginalization and discrimination that came to a fore during the riots, as well as ongoing commentary by Richard Pryor, who was not well-known at the time. (The profanity in Pryor’s monologues resulted in an R-rating.) WATTSTAX was more than a documentary about the festival; it gave voice to the joyous celebration of Black culture at a time in which wounds from the Watts Riots were still fresh and brought the show’s message of honor and pride to audiences that could not attend the concert in person. Sponsored by both Stax and the Schlitz Brewing Co., the proceeds from the festival’s $1 a seat ticket prices went to benefit the Sickle Cell Anemia Foundation, the Martin Luther King Jr. Hospital in Watts and the Watts Summer Festivals. Stax insisted that roughly 90% of the film’s 12 crews were comprised of African American filmmakers as a response to the fact that Hollywood did not often hire Black crew members. Famed filmmaker and composer Melvin Van Peebles also appeared on stage to address the audience. Some acts were filmed in other places and edited into the concert footage, and two hits sung by Isaac Hayes from the movie SHAFT (“Theme From Shaft” and “Soulsville”) were removed from WATTSTAX after its premiere because M-G-M won a preliminary injunction against the use of the songs and filed a lawsuit for $1 million in damages. When WATTSTAX went into general release, its filmmakers were forced to replace the songs from SHAFT with another Isaac Hayes performance of “God Is On Our Side,” which was shot later at the Coliseum with 100 background actors simulating the crowd.

WATTSTAX grossed approximately $1million before it stopped being distributed due to other legal issues, including a $2 million suit against Pryor filed by Ala Enterprises Inc., which claimed to have exclusive rights to his material. In 2003, the 30th anniversary edition of WATTSTAX was released on DVD and restored Hayes’ performance of “Theme From Shaft,” along with issuing a new soundtrack CD. 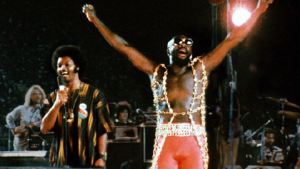 In 2020, WATTSTAX was selected for preservation by the National Film Registry, which on its website called the documentary “far more than simply a great concert film…[it] celebrates the Los Angeles Black community’s rebirth after the tragedy of the Watts riots a few years earlier. Richard Pryor’s knowing monologues frame and serve as a Shakespearean musing on race relations and Black American life, alongside the incisive comments from people on the Watts streets.”

On February 24, 2023, Stax and Craft Recordings will release two CD box sets, Soul’d Out: The Complete Wattstax Collection and Wattstax: The Complete Concert. Additionally, a 1-CD release called The Best of Wattstax will showcase 20 performances from the event, and the two original soundtrack 2-LP albums will be reissued, Wattstax: The Living Word and The Living Word: Wattstax 2. The remastered and restored WATTSTAX will also be screened in February 2023 at the Alamo Drafthouse Cinemas, with locations across the U.S.