On April 1, 1965, THE SOUND OF MUSIC, starring AFI Life Achievement Award recipient Julie Andrews as Maria von Trapp, debuted in theaters, delighting audiences around the world. This month in honor of its release, the AFI Catalog explores the making of the beloved musical, which became one of the highest grossing films of all time and won five Academy Awards®, including Best Picture.

The film was adapted from the Richard Rodgers and Oscar Hammerstein II Broadway stage musical of the same name, which itself was derived from Maria Augusta von Trapp’s 1949 autobiography, The Story of the Trapp Family Singers. At the time of the musical’s first run in 1959, the book had already been made into two popular West German feature films directed by Wolfgang Liebeneiner, DIE TRAPP-FAMILIE (1956), and its sequel, DIE TRAPP-FAMILIE IN AMERIKA (1958). Paramount Pictures initially optioned the rights to DIE TRAPP-FAMILIE as a vehicle for Audrey Hepburn, but when the actress became unavailable, Paramount discontinued the project and musical director Vincent J. Donehue convinced actress Mary Martin and her theater producer husband Richard Halliday to pursue to property for the stage. After months of negotiations, the German producers of DIE TRAPP-FAMILIE agreed to sell rights to the story in exchange for permission to release their film in the U.S. around the time of the musical’s opening, capitalizing on its anticipated success. Maria von Trapp was located in an Austrian hospital suffering from malaria that she contracted from her missionary work, and she agreed to the deal, hoping the funds would help support her philanthropic efforts. Releases were also secured from the seven von Trapp children, who were scattered around the world. While DIE TRAPP-FAMILIE is not credited onscreen as source material for THE SOUND OF MUSIC, one of its two screenwriters, George Hurdalek, is named in the credits with the descriptor: “With the partial use of ideas by.”

In June 1960, Twentieth Century-Fox purchased a 15-year lease on screen rights to THE SOUND OF MUSIC musical for $1.25 million, the largest amount of money paid by a studio for a literary property at the time. The deal marked Twentieth Century-Fox’s fourth acquisition of a Rodgers & Hammerstein musical and the contract stipulated that THE SOUND OF MUSIC film would not be released until 1963, when the musical was set to end its first run on Broadway. The same month, the studio took ownership of all rights to the two previous German films about the von Trapps, hoping to mitigate any competition. The pictures were eventually edited together, dubbed into English, and released as THE TRAPP FAMILY in 1961.

Meanwhile, Twentieth Century-Fox began production on CLEOPATRA (1963), which went $30 million over budget and nearly bankrupted the studio. Due to the financial crisis at the studio, Darryl Zanuck took over as president and THE SOUND OF MUSIC was given low priority, although Henry Koster was slated to direct. Zanuck contracted Ernest Lehman, who had been recently nominated for an Academy Award® for WEST SIDE STORY (1961), to write the adaptation. By early March 1963, Koster was replaced by William Wyler, but Wyler was skeptical about the project and Robert Wise (who directed WEST SIDE STORY) was hired to take the helm in November. Casting began in January 1964 and Julie Andrews landed the role of Maria despite being relatively unknown, since her theatrical film debut, MARY POPPINS (1964), had yet to be released. Filming began on March 26 at the Twentieth Century-Fox studio in Century City. The company later moved to Austria to shoot exteriors, although the filmmakers were met with inclement weather that put the production $1 million over budget. Returning to the studio lot in early July, filming of interiors continued through August.

When THE SOUND OF MUSIC made its first screening for a test audience in Minneapolis, it was celebrated with two standing ovations, at the intermission as well as at the end of the film. It made its world premiere on March 2, 1965, at the Rivoli Theatre in New York City, followed by a posthumous Humanitarian Award presentation for Oscar Hammerstein, who died five years earlier not long after the musical opened on Broadway. THE SOUND OF MUSIC opened nationwide on April 1 at select theaters as a “roadshow release” with reserved seating to accommodate its 70mm format and stereophonic sound system. Several months later, THE SOUND OF MUSIC was released internationally and became the first U.S. production to be dubbed completely into foreign languages, with dialogue and with music. 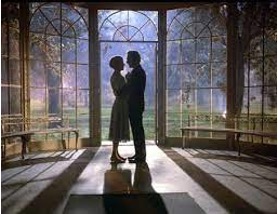 Despite its vast popularity with audiences, the picture received mixed reviews with critics who complained that the story was overly sweet and banal. Yet well over one year after its release, THE SOUND OF MUSIC continued to sell out theaters on a reserved seating basis and Twentieth Century-Fox anticipated even greater earnings when the picture was moved into wider release. A number of cities across the nation earned “Outstanding Achievement Awards” from the studio for having theater attendance records that exceeded their populations. THE SOUND OF MUSIC’s initial theatrical run lasted over four years, the longest initial release of any film in history to that time, and it was the first movie to gross more than $100 million. Today, THE SOUND OF MUSIC remains the sixth-highest grossing film of all time (with funds adjusted for inflation).

The film earned Andrews a second Oscar® nomination for Best Actress (her first nomination was for MARY POPPINS) and a Golden Globe Award for Best Actress—Motion Picture Comedy or Musical, cementing her legacy as one of Hollywood’s most celebrated and beloved artists.

The film is honored on across several AFI Lists, including the 100 Year…100 Movies list of the greatest films of all time and was selected for preservation by the Library of Congress’ National Film Registry in 2001.

Watch Julie Andrews reflect upon her experiences making THE SOUND OF MUSIC at AFI’s “Night at the Movies” which celebrated the Institute’s 40th anniversary:

THE SOUND OF MUSIC continues to resonate with the hope of a better future, bringing notes of joy and optimism to audiences worldwide that defy political divides. The film remains a powerful voice for freedom and exemplifies the capacity of movies to bring us together, particularly during hard times. On this anniversary of its national release, AFI celebrates THE SOUND OF MUSIC and its resounding appeal for peace across the globe. Learn more at the AFI Catalog.