One hundred years ago this month, THE FOUR HORSEMEN OF THE APOCALYPSE was running in theaters across the country to become the highest grossing movie of the year and one of the first silent films to make $1 million, topping Charlie Chaplin’s classic THE KID (1921). Adapted for the screen by June Mathis, head of the Metro Pictures Corp. scenario department, THE FOUR HORSEMEN OF THE APOCALYPSE was one of America’s first anti-war movies. It was based on Spanish author Vincente Blasco Ibáñez’s popular historical novel from 1916 which explores two interconnected families during WWI who find themselves on opposite sides of the conflict. Mathis refocused Ibáñez’s narrative on character development against the background of the war, omitting the novel’s lengthy philosophical sections. One notable sequence features German officers in drag. Audience members of the time generally saw this as a masquerade ball, but those in the know relished Mathis’s nod to alternative lifestyles. Although Germany objected to the film’s content, Ibáñez approved of the adaptation, and the executives at Metro were so impressed that they made Mathis a hands-on consultant on the project.

It was June Mathis who recommended her frequent collaborator, World War I veteran Rex Ingram, to direct THE FOUR HORSEMEN OF THE APOCALYPSE. Ingram went to great lengths to recreate the 1914 Battle of the Marne. He drilled and trained the background actors who would make up the French and German armies and hired experts and former soldiers from both sides as advisors. To make the ambitious battle scenes realistic, Ingram planned the shoot as if going to war, even using original maps. A French village and castle were constructed on location in Los Angeles to be shot with 14 motion picture and two still cameras simultaneously. Ingram hired 14 additional directors, dressed them in uniform and put them on horseback to manage the action on the ground. 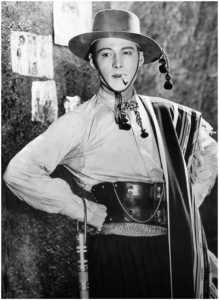 June Mathis also insisted on the casting of 25-year-old bit player Rudolph Valentino in the lead role of tango dancer Julio Desnoyers. Offscreen, Valentino was far from the iconic Latin lover he would portray, but Mathis recognized the charisma and sexuality he exuded on camera. Mathis is rumored to have directed Valentino’s scenes herself and she would later become known as the architect of his career. THE FOUR HORSEMEN OF THE APOCALYPSE made Valentino an instant matinee idol and Mathis one of the most powerful women in the industry, second only to Mary Pickford. Mathis is often referred to as Hollywood’s first female executive. Throughout her short but productive career, Mathis had her hand in all aspects of moviemaking, from development, to production, to the cutting room and beyond, but THE FOUR HORSEMEN OF THE APOCALYPSE marked her indisputable authority in Hollywood.